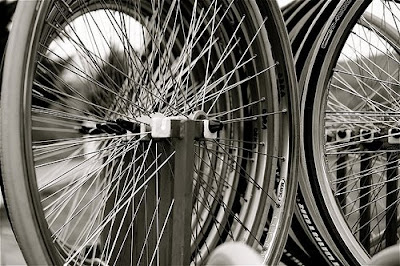 A race like this is a true test of motivation…. You drive 5 hours to line up in the rain. The entire weekend is organized around a 33 mile race, an hour and 4 minutes of riding, 25 minutes of utter pain.

When we awoke in the Forest Grove Best Western on Sunday morning, the sky was clear and the weather looked promising. A few scattered clouds were overhead, but nothing like the black, ominous canopy that so often covers the west side of the Cascades. Breakfast of oatmeal and eggs sat heavy in my stomach, I was feeling anxious.

We; myself, Mary, Renee, and Amanda (all from the Bend Bike N Sport Team) arrived at Hagg Lake Boat Ramp C just after 8am, with plenty of time to warm-up beneath a bright blue tent, and quickly realized that rain doesn't necessarily mean cold; we soon were removing layers as our trainers spun in the background.

At 9:25am, with no neutral roll-out, the large Cat 4 Women's field was off. The first lap was full of nerves and a bit faster than at Cherry Pie. We all stayed in the lead group and I was feeling strong, confident, and bit more patient than previously. After the peloton crossed over the damn on the first lap, Lindsay Fox was off the front and stayed there for a little longer than I felt comfortable with – so I tried to organize a little chase. It worked and she was reeled back in, but the energy expended was in vain, as we were soon "neutralized" for no apparent reason (this happened 6 times during the first 2 laps of the race).

Lap 2 played out about the same for the front group…. The pace was steady, the hills were hurting some, helping others and those just trying to hold on were popped out the back. I felt strong on the uphills, but suffered on the descents; having trouble holding the wheel in front of me; for fear of slipping out on the wet corners (I will have to work on that).

At the start of the 3rd lap I had just taken my GU and guzzled some water. This was it, I was in the front group, I was strong, only one lap to go… be patient, don't rush it, protect yourself for the next 7 miles and then go.

We crested a slight hill about 1 mile into the 3rd lap when I realized I had a flat. My front rim pressed against the pavement, I had no choice but to stop and signal for the neutral support car. Because there were a number of riders who had slipped off the back, but were still in front of the support vehicle, it took what seemed like "forever" for the car to reach me. A new tire was passed over, the flat one taken away and with a slight push from the race official I was off.

I could see the flashing light of the official's vehicle, but just barely. I got into the drops and rode. I rode as fast and as hard as I could. I charged the hills and took risks on the descents. Without one else around, I was not as nervous on the slippery corners. I quickly picked off the girls that had earlier fallen back. None of them were in any position to help me.

I rode alone, time trialing around the lake. When I turned onto the damn I could see the group just exiting it and pushing forward. I glanced at my watch. My HR was 187. I swore again and pushed on all the harder. I didn't feel much, except my legs burning as I rode up the Lee Hill. 3 miles to go and I knew the group would be pushing too. The Men's Cat 4 field was approaching, I wanted to have sign on my back reading, "I didn't get dropped, I flatted". I caught on to the back of that group, holding on for the last 200M of the race, rolling among them at the finish. We caught the tail end of the leading Women's group, but I couldn't make a move, I couldn't advance my position, all I could do was finish.

I rolled through the finish to Mary and Amanda who were just riding up the hill to the cars.

I was frustrated and upset, but this somewhat subsided when I learned Mary had placed 3rd. I rode around the parking lots a couple of times, partially to cool down, mainly to decompress.

It was just a race, a race I had trained through, yet another learning experience and chance to test my true fitness level. I couldn't deny I was disappointed, but as I took a deep breathe and saw Mary's beaming face as I approached the car, I couldn't help but smile. 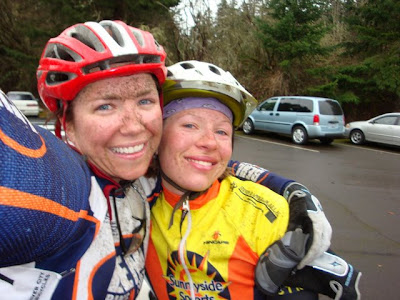