Banana Belt is canceled for today. 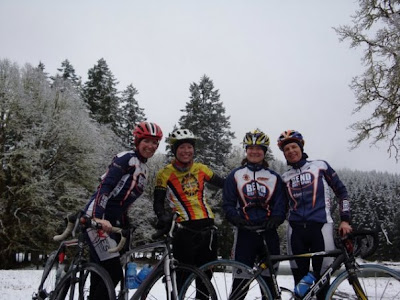 The forecast called for snow, but we went anyway; over the pass, through the snow and to the west side of the cascades.

The drive was eventful to say the least. 4 women, 4 bikes, and a dog in Mary's Eurovan. The roads were dry until just pass Camp Sherman, and almost instantly, snow covered the road sides and trees that lined the highway. We crested Santiam Pass and just on the west side, we hit a deer. Mary couldn't have handled the situation better and after taking a couple deep breathes and assessing the damage, we decided to continue on. The van, though injured, was still drivable, the damage only cosmetic.

As we rolled into Forest Grove the temperature read 41F. The forecast must be wrong, it doesn't snow in Forest Grove and the snow level is very rarely 0 ft.

After dinner and a bike cleaning session, we snuggled into bed, turned the clocks an hour forward and quickly fell asleep. I hoped to sleep well; I was excited and nervous for Sunday's race.

Each race I learn something about bike racing and training. I was hoping to put all the pieces together and come out of Banana Belt #2 with some upgrade points. In preparation for the race, I put some thoughts on paper.

I am not nervous, but instead determined; not to win, but to race well. If racing well equates to winning, I will be pleased, but racing well and not winning will serve me better than to win without the satisfaction of knowing I truly tested my strength and power and will.
And while bike racing is much different than running, I can't help but recall the quote by Steve Prefontaine:

"No one will ever win a 5,000 meter by running an easy two miles. Not against me. I am going to work so that it's a pure guts race. In the end, if it is, I'm the only one that can win it".
The alarm went off at 6:30, a glace out the window revealed snow…. "It will melt", I told myself. I pulled on my Sunnyside Kit, long tights, hat, jacket and then the news came in….

Banana Belt is canceled for today.

Disappointment swept over me, but only briefly. "We will ride" Carrie announced and everyone smiled in agreement.

And ride we did. Adorned in all the clothing we had, we rode; out to Hagg Lake, around the race course, through snow and slush and mud. We stopped to capture the event, which would have more aptly been with skies and not bikes in the foreground. Our toes lost feeling and we hammered up the hills. If we weren't going to race, we were still going to get our workout in.

Mary led up the first hill, Carrie the second, then it was my turn. We all worked together, pushing ourselves harder than we would have alone and encouraged one another as we crested and made our way down the other side of each roller. Amanda got quiet, her toes were freezing.

We braved the weather for an hour and a half and headed back toward the hotel via Old Highway 47. The hot tub was our next destination, quickly pulling off our soaking wet, dirt covered cycling tights.

We drove to Portland to ride bikes in the snow; couldn't we have done that at home?

We rode bikes when we should have been skiing; it's March, what were we thinking?

We froze our toes and ate continental hotel breakfast, and slept in beds that were not our own…. And we will do it again.

It is not only from the race that we reap the rewards of training and sweating and riding in the mist of winter. It is from the friendships made, the smiles captured and the memories held that, without hesitation, motivate us to pull on our booties, pin on our numbers and ride in the snow, because really, there isn't ever a finish line.
Newer Post Older Post Home