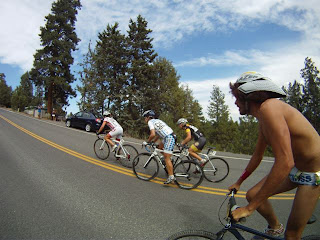 It was tough, super tough.  It was hard, fast, 102 degrees and fabulous.  These girls race bikes for a living, they get a pay check because they ride fast and hard and aggressively – and in front of the hometown crowd, I am getting just as many cheers as the girl in the yellow jersey.  Ben and crew were at the base of Archie Briggs, Austin has written my name in chalk on the road, people I didn’t know where yelling my name.  And then there was the local triathlete that made me smile amidst burning lungs and screaming legs.  Don was there when I crossed the finish line.  He did a cool down with me; on his Trek Remedy.  I had just finished my first NCR race – take out Wednesday's unexpected date with the asphalt and I had done pretty darn well.  After a cold shower and big buffalo burger, I decided to do it again next year.
Newer Post Older Post Home