High Cascade 100 - A really long time to be riding a bike! 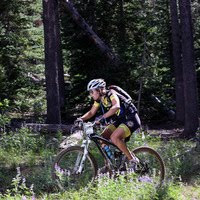 Saturday morning came early - too early.  After a week in Salt Lake City for the Outdoor Retailer Show and a few too many running miles on legs that can't quite remember what running feels like; I woke at 4am on Saturday morning.  Coffee and breakfast down, off to pick up Don, and head up to Wanoga.
Headlights were required as we headed up Century Drive.  Don was telling me about his up coming week long adventure called The Oregon Bike Ride. I kept asking him questions, not only because I was interested, but also because I didn't want to think about the challenge I was about to under take.
Who in their right-mind decides it is a good idea to ride their mountain bike for 100 miles?  No one.  We are all a little bit crazy - but that is why we are friends.  Don completed HC100 in 2009; seeing him accomplish this was pretty awesome.  I wanted in.... so 12 months later, there I was, standing in the twilight, shivering, waiting for the race to begin. 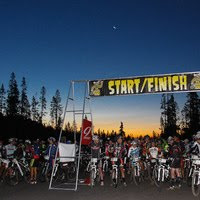 I had never before ridden my mountain bike for 100 miles.  I knew it would take me a long time.  Based on fairly educated estimates, I calculated it would take me about 11½ hours.  That is a long time.
As the miles and hours ticked by, I found myself having fun, smiling, laughing, and feeling incredibly fortunate to be riding my bike for the entire day.  The folks at the aid stations were awesome and even the photographers from Oregon Velo were encouraging as we passed, covering them in moondust.  The course was challenging and as the day went on, I felt stronger and more confident – until I didn’t.
About 64 mile, I drank an entire Coke in about 15 seconds.  Not the best idea.  It wasn’t part of my fueling plan, but an ice cold coke sounded magnificent, so I downed the entire thing while my chain was being lubed and then took off.  About 30 minutes later, as I climbed Farewell, in the heat of the day – I realized my mistake.  My stomach was unhappy, my legs didn’t want to go and I was HOT. 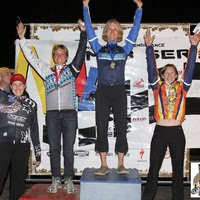 At a technical, rocky section, I stopped for a minute; took a Gel, drank some water, and told myself KEEP MOVING FORWARD.  For about 45 minutes I struggled.  I was tired, dirty and felt like puking was in my near future – then it passed.  All of a sudden, I began to flow again.  KEEP MOVING FORWARD, but faster this time!
As I rode toward the Dutchman Aid Station, at mile 78, I knew I would finish the race.  At Wanago, mile 87, ready to begin the third and final lap, I realized I could go under 11 hours.  I knew this trail and I charged as hard as my tired legs (and arms) could handle.  I passed a couple of guys in the last 4 miles, climbing steady up the Funner Trail. 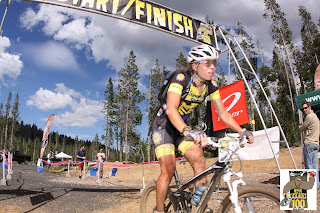 I hadn’t seen Ben all day.  The plan was that he would try to meet me at one of the aid stations, but no definite plans.  I figured he had probably ridden with some friends and was now in town, enjoying a cool, refreshing beverage somewhere.  But, when I rounded that last corner, to roll under the finishing banner, Ben, Aaron O and Rocco were all there; cheering and smiling.  It was awesome – what a amazing gift to see Ben’s face waiting for me there.
Here is a really silly, sort of embarrassing video that pretty much sums up the day.