What happens when you gather 25 of your closest friends, have them dress up in costumes, pass out Pabst Blue Ribbon, and have them follow a flour trail all around town??

The gathering started at our place at 8pm and Hailey and I, acting as the Rabbits, took off. 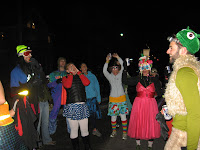 Soon, the group of jovial participants followed, running through Newport Market, and along 12th street toward the first Beer Stop at Greg and Andrea’s. From there, the brightly colored mob made their way through Columbia Park and over the foot bridge. The next PBR stop was Jenni and Aaron’s, but first, the runners had to navigate their way through a couple of icy alleys and tricky turns. 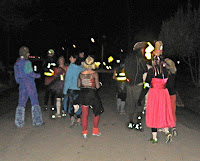 Then on to downtown…. By this point Hailey and I had completed the marking of the course and were able to meet up with the group just as they crossed over onto Bond Street and into the Downtown. We heard them hollering from 4 blocks away and we knew they were having fun, when we got closer and saw the smiles on their faces, we knew the course we had set was just right. Through McMenamins, the Double D, Deschutes Brewery, the Decoy, a little dancing at the Bend Distillery, along the streets of downtown, through Drake Park, over the footbridge and on home. 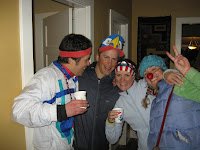 We capped of the night with hot spiced cider and some dancing to Jodi Gold’s music mix. A house full of happy faces soon dispersed to the arranged after parties in great spirits as they went to ring in the New Year. More than one party-goer expressed

“This Was the Best New Year’s Eve Ever”