Christmas in a Winter Wonderland 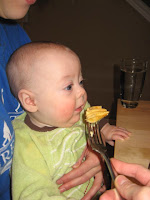 I never thought making our way to Portland would secure our chance at a white Christmas, but this year things looked different in the Rose City. After canceled flights and terrible weather warnings, Ben and I weren’t about to miss the holidays with our family, so we jumped in the car on Tuesday Night and ventured across the pass to the snow and ice covered streets of P-town.

I had never seen Portland so smothered in snow and the city was all but shut down. Wednsday, Christmas Eve, was one of the most relaxing days we have had in a long time. Sleeping in, breakfast with Kacy, Andrew, and the waffle eating Max and then a lot of lounging and the introduction of Wii…. 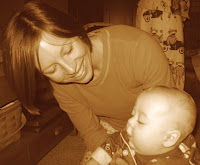 Around 2pm Ben and I decided to make a move and ventured out, equipped with 4-wheel drive and made the holiday rounds… We were able to visit with John, Hillary and family – Jackson showing off his ski jumping skills on “Dead Man Hill”. Next we made our way to Vancouver and over treacherous roads to visit Papa & Connie, as well as Kelly, Phil and their family. Although the time passed too quickly, it was nice to get some long awaited hugs. We finished off the evening with a hearty warm soup at Mom’s house, after being greeted by Mom, Mark, Barbara, Kim, Gram, and of course Kacy, Andrew and Max. 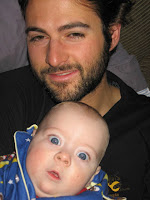 Christmas morning was one of the most relaxing and fun I can remember… maybe because it was Max’s first Christmas, maybe it was because Ben was there to share it with us, or maybe because instead of exchanging presents this year, our family made a contribution to the Raphael House in Portland. We had stocking filled with Pez dispensers, socks, and a few other fun things… along with a lot of good cheers, smiles and hugs.

Ben and I had to head home that afternoon, leaving Portland around 2:30 and not arriving home until almost 8pm – it was a long drive, but well worth the trip.
Newer Post Older Post Home