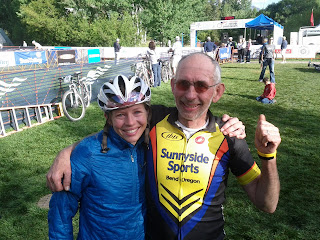 My mind is cluttered with the events of the weekend and all the emotions included. Thursday and Friday were full of tears, not the good ones. But instead the ones of frustration, self-doubt and hollowness. Saturday was filled with a different kind of tears – the joyful ones. 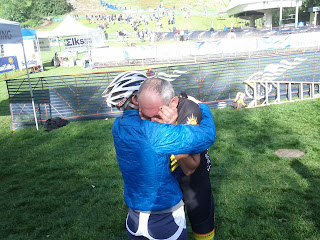 At 7:45am Saturday morning, Don toed the line for his National Championship Race. 49 minutes later, he was National Champion. The smile on his face was one I will never forget. INCREDIBLE. Tears were streaming down his face. His smile stretched from ear to ear. I couldn’t help but join in the tear-fest.  It was AWESOME. I wanted to bring Don a bottle of champagne and help him drink it, but instead I jumped on my bike to warm up for my own race. The gun went off at 10am.

Standing on the starting line at an OBRA race, you recognize almost every face. You know what you are up against. You have expectations for yourself. This race was different. I only knew one face, that of the Mighty Megan Chinburg . We stood next to one another, at the back of our field. We didn’t get call-ups, we weren’t noticed. Then the gun went off. Oregonians are tough, and we raced that way. Though the rock garden and onto the single track, we were 1 and 2. SWEET.

The amateur course was about 14 miles in length. A 2-mile start loop and then 2 laps of a 6-mile course. 3 miles up, 3 miles down.

Up the single-track climb, I was charging, when I could. I was catching women in the field in front of me, requiring a dismount, bike-push, attempt to pass, remount, charge. Catch, slow down, dismount, push, attempt to pass, remount, charge. You get the idea. Toward the top of the single track climb, I had a pretty clear path in front of me and I was really trying to move. I didn’t know what my gap was, but I hadn’t seen anyone for a while. Then, out of nowhere, a women in my field, the eventual winner, came charging by. She was cruising. I tried to stay with her, but she was on fire. I just couldn’t push the pedals that fast. She ended up winning by almost 6 minutes. Decisive to say the least. I hit the double track, shifted down and stood up. Legs were burning, but the downhill was just around the corner.

Descending isn’t my strong suit, but I am improving and I was really pleased with the way I rode the downhill section of the course. I was having FUN! I didn’t know how far ahead the leader was or how far behind my chasers were, so I just stayed calm. I hit the flat portion of the course and stood up. Hammered through the rock gardens and began to climb through the forest for the second time.

Lap #2 unfolded pretty much the same way as #1. Except, I was fatigued. When I had to get off my bike because I caught up with someone, I didn’t remount as quickly. I had trouble getting my feet back into my pedals as my legs were shaking and unsteady. There were 3 girls walking up the hill. “Riding….I’m not in your category” I yelled. They didn’t budge. They were slowly trudging up the trail and the steepest part was right around the corner, no chance they were going to start riding.

STAY CALM. I would just use this as a chance for a little recovery, get past them when I could and then charge. Getting off your bike and trying to hike/run/walk is NOT recovery. I passed them as soon as I could, but charging was not in the cards. Keeping the pedals spinning was all I could do. The double track climb signaled about 1 mile to the top. I picked up the pace, got in some calories, and stayed focused. Downhill to the finish.

After Return of the Jedi race, I was frustrated because I felt I had “lost the race on the downhill”. Whether or not that is true doesn’t matter, what matters was that I was not going to get caught this time. I didn’t. 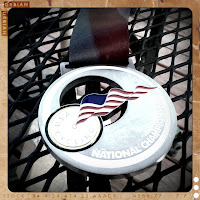 Bend riders has a lot of success on Saturday and it was great to see so many smiling Oregonians taking their spots on the podium at the awards ceremony in the town square Saturday night.   Don and Brennan took home Stars and Stripes jerseys.  When my name was called, I was overcome with emotion.  I didn't realize what an honor it would to receive a silver medal until that moment.

I almost didn't come to Sun Valley because my ego was getting in the way; learning to slap yourself in the face, screw your head on straight and toe the line is sometimes the most difficult thing about racing.  I am newly inspired by what I witnessed last weekend.  I am motivated more than ever to develop and grow as a racer and as person; to celebrate our community of cyclists and to learn from those who are so willing to teach.
P.S. A big shout out to Adam Craig and Carl Decker for just being nice and to Lizzy English, my newest super-hero crush, who rode out of her skin to finish an amazing 12th in the Pro Women XC race and 3rd in the SuperD.

And, of course, a trip to Idaho just wouldn't be complete without a ride at Fisher Creek.