Letter from the Pacific Trail #5 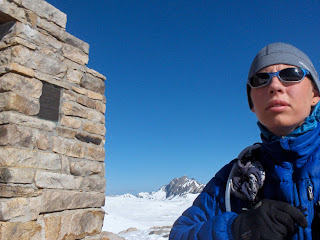 Hello Friends, Happy 4th of July!! I find myself on this sunny holiday afternoon in Pooh Corner, the home of a trail angel on Donner Lake near Truckee, CA. I hope you are all well and enjoying a day of rest and relaxation with a cold drink in one hand and a piece of watermelon in the other.
I am uncertain as to where to begin with this letter - so much has transpired since I last wrote to you all and my mind races with images and stories that I would love to convey - now if I could only turn those thoughts into words and sentences......


The last time I wrote I was in Bishop, CA which seems like so long ago - and well, to put it simply; our feet are still wet, we are still traversing snow fields and navigating through sun cups, I have learned to boot ski and am "racing" at a 1st grade level, and my skills with a map and compass are greatly improved.

From Tuolumne until Sonora Pass was had about a dozen river crossing where the potential of being swept away was relatively great, half because of the force of the thigh deep water and half because of the force of the chest deep water - shall I say it again, our feet are still wet. We encountered a 350 pound bear in the bottom of Virginia Canyon, watching him from the distance of 50-75 yards for about 15 mins.; digging for grubbs and eating whatever the spring snow melt left for him, he undoubtedly knew we were there, but pretended, successfully, that he did not, finally going on his way down the canyon.

After a short afternoon stop in Bridgeport to grab an ice cream sandwich (my new favorite treat) we headed off again, over Sonora Pass and on to Lake Tahoe - we had planned 3 days for this 76 mile snow covered section (we = Ben, myself, and our new and most excellent friend Eric D.). Just before 6am we were on the trail, climbing up a snow field toward Sonora Peak when we spotted the figure of a hiker just above us - we quickly reached him and started to chat - Tony was 62 year old British born, Canadian citizen and had hiked the first 700 miles of the PCT in 2005. This was his first day back on the trail and was planning to hike a few of the sections that he didn't get to see last year. He seemed timid on the snow and asked if he might hike with us for a while - the four of us proceeded along for not long when we arrived upon a 45 degree sheet of icy snow, ice axes came out and Eric D kicked steps, I followed closely, then Tony followed by Ben - I made it across and turned around to see Tony slip slightly, Ben latched onto him, stopping him after just a 3 foot slide, both regained their footing and proceeding.

Then, 7 or so steps later, the episode repeated, although this time, when Ben attempted to tackle and stop the slide, it was unsuccessful. Both Ben and Tony went sliding, Ben working with all his strength to slow them both down. The snow field ended about 60 ft below, revealing a drainage filled with rocks, boulders and one small bush. Ben could see he was nearing the end of the snow and miraculously, finding his feet, landed straight up on the rocks. Tony had completely lost control of his body at this point, tumbling down, rolling shoulder over shoulder - nearing the end of the snow, he was not slowing down. From above, it was all happening so fast, he was going down head first, he hit the bush, tumbled again, hitting his head on one of the largest boulders and coming to a stop. Ben was at his side immediately and before I knew it I had slid down the snow to help - Eric D. followed. Tony was pale, his left shoulder and arm lying in a very unnatural position, his pack tugging on this upper body.

Ben and I had taken a Wilderness First Responders course in the Fall; it was time we put it to use. We quickly assessed the situation - he was conscience and breathing, I applied pressure to his head wounds, which were only superficial and Eric was on his way to get help (Sonora Pass was only 3-4 miles back). For the next 5 hours, Ben and I did our best to care for Tony - all the scenarios that we had practiced in our WFR class had become a reality and we worked well together to monitor his vital signs, keep him fueled and hydrated and as comfortable as possible. We determined his injury to be a dislocated shoulder and because help was soon to come, we made the decision to not reduce it, but wait for profession help. Finally Eric returned, accompanied by 2 US Marines with radios. Before we knew it, Tony was being prepared to be airlifted out - the helicopter was on its way, the Marines thanked us for our help and we said good bye to Tony - and we continued on.

It was an emotional morning, Ben had saved Tony's life by slowing him down just enough on the snow, Ben was in one piece, unharmed - he really does have 19 lives, my mind was filled with the scene, replaying over and over - and we now had just 2.5 days to get to Tahoe, to meet Papa for the weekend - we had to keep moving. Eric, Ben and I could not believe what had transpired, we were all in shock and as the hours went by, we began to discuss the morning.... how lucky we were to be safe, how glad we were that Tony had not been alone, how carefully we needed to take each step........... What we were doing was dangerous.

Although snow traverses are getting easier, I cannot remove Tony's accident from my mind and I move a bit more slowly and carefully on the ice. We later came to learn that another friend, Lico, slipped on that same snow just a few days later and suffered minor injuries that forced him to take a week off trail.

We made it to Tahoe, enjoyed all-you-can-eat buffets, a movie, a wonderful visit with Papa, a shower, clean clothes, and some more food, did I mention that we ate well......... We were off again - soon arriving in Pooh Corner, where I now sit, writing this extremely long, wordy, poorly written piece.... each day on the trail seems, in a way, like a lifetime, to express this in words is difficult and if you made it this far, I thank you.

We head out town morning for another grand adventure - Belden is our next main resupply, where we should arrive on the 12th and then on to Old Station around the 15th.

I hope this finds you all well - much love from Ben and I - I am having a blast but I must admit, I miss you all. - S
Newer Post Older Post Home