Three weeks removed from our epic adventure into the Hemlock Hut, at the base of Mt. Bailey, I am sharing the story.  It has taken this long for me to wrap my head around the experience.


I never saw the mountain, just giant Hemlocks; branches weeping under the weight of the snow.  The skin track cut the night before had all but vanished by first light.  The cabin's front door had to be routinely cleared of snow, unless we wanted to use the second story door.  From the time we left our car on Sunday and returned to it on Wednesday, it never stopped snowing.

That is a lot of snow.  As indicated in the picture below.
This amount of snow would have been epic in and of itself.
But the adventure was greater than the amount of snow that fell.

It was greater than hauling an overloaded Chariot trailer along a single skin track, which is nearly impossible.

It was greater than the memories of good friends, sharing good food and good conversation.

It was greater than shooting the BB gun at Name Tag beer cans, but the light of a headlamp.

It was greater than hauling somebody else's skis on my back, along the skin track to and from the hut because, beneath the snow, lay a ski, a skin and binding; lost at least until spring, when the snow melts away.

This adventure was great.  And made greater because, between the coziness of dinner by the fire and an epic 8 hour 4-mile evacuation, there was an avalanche. And we, Ben, myself, and a good friend, John, got caught.

We were skinning up, along the treeline, on a slope of less than 30 degrees.  We had our climbing skins on, climbing bars up, boots in tour mode.  We were chatting, about nothing really.  Not about avalanche danger, not about taking risks.

I was following close behind, about the kick into the track Ben had made up toward the right, when the ground started moving.

Stay up, stay up.  The last thing I heard Ben say as the snow swept my feet from beneath me was Stay Up.  I starting sliding, skis and feet stretched out in front of me, arms swimming through the winter atmosphere that surrounded my whole body.

The world slowed down.  Slow motion does crazy things to the mind.

When learning about avalanche, you listen to first-hand accounts about slides and watch movies about avalanche survival.  You are told to swim if you get caught.

You are told about the power of sliding snow and the risks of backcountry skiing, but, when winter comes, you turn on your transceiver and head out into the snow covered wilderness anyway.  Avalanche would never happen to me.

Avalanche happens.  And it is scary.  We all went down.  I went under.  I missed a breath.  My mouth filled with snow and the light of the day turned very dark.  I swam.  I fought.  My mind stayed amazingly calm.  And then I surfaced as I came over a roller.  The trees were right in front of me and I was heading toward them.  Fast. 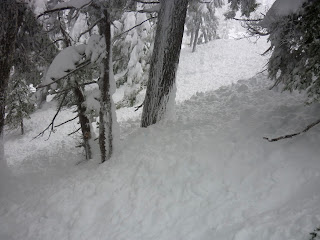 This is it.  I will survive, but my legs will be broken.  I am going to run into this tree.

I did not run into the tree.  And miraculously, I didn't run in the the other four enormous hemlocks I surfed between.  I slowed down, the snow stopped moving and set up like concert within seconds.  I couldn't move my legs; I was buried from the waist down, but my arms were free.

Start digging, get yourself out, turn your transceiver to SEARCH mode.  Find Ben.

We are going home.  Ben's voice was above me.  I twisted at the waist and I could see him, directly above me, at the base of the Broken Leg tree.

And then there was a lot of shouting.  Your legs, how are your legs?
We yelled the same question back and forth.

Ben was at the base of the roller, he had gone under too.  A full cartwheel, skis attached, face-plant into sliding snow.  He told me later there was one thought in is him mind as he struggled to right himself. 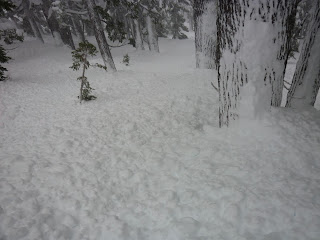 This anger gave him the strength and determination to struggle and break free of the crushing snow.  When he saw light, he also saw the branches of the Broken Leg tree; he grabbed on.  When he came to a stop, Ben could see me and he could see John.  John had stayed upright, to the far left flank of the slide; but he didn't go unscathed.  John's ski was somewhere under the rubble.  My pole was gone as well and that was all I could think about as Ben began to unbury my legs.

How are your legs, can you move them? He asked repeatedly.


I don't care about your pole, how are your legs? 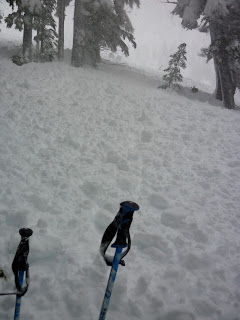 My legs were fine.  My skis still attached to my boots.  Ben was fine.  John was fine.  We are all fine.  Physically, we were all fine.  But I was shaking.  I was scared.  I was standing at the base of an avalanche debris field.  I wanted to go home.  I looked at Ben and I knew he understood.

We climbed up through the trees to find John.  His ski was gone; and he didn't care.  We were safe and together and in one piece.  We didn't talk about it, we didn't analyze or discuss or evaluate, we just got the hell out of there. 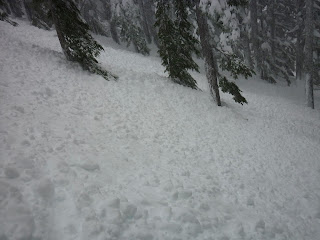 We headed back to the hut, John scooting his way along our snow covered skin track.  It was already getting late in the day; so we decided to stay the night and depart in the morning.  At first light, the journey back to the cars began.  I left the hut at 8:12am, we pulled out of the snow park at 3:46pm.  Distance from hut to snow park - 4 miles.  Mt. Bailey. EPIC. Period.