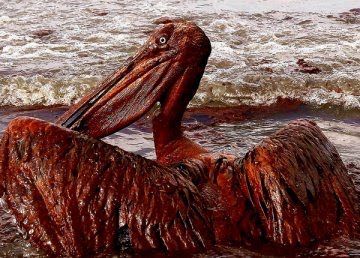 “I am furious at this entire situation, it is an example where somebody didn't think through the consequences of their actions.”  President Obama said this in response to the world’s largest oil spill, continuing to flow off the southern coast of the United States.

We all know about the oil spill, but we can’t feel it, we can’t see it, we can’t touch it.  Gas prices, our closest connect to the Gulf Coast, are just about where they were 7 weeks ago, when this crisis began, or should I say, came to fruition.  The crisis began long ago, but lets save that for another debate.  For now, let’s talk about the last 7 weeks.  Yeap, that’s right, the oil has been spilling from the depths of the earth’s most unexplored regions for more than 7 weeks.  7 weeks, that is about 50 days….. they have tried to cap, cut, suffocate and distract the leak – with no success.

Every public building has an evacuation plan, every gas station has an emergency shut-off, the United States Military has spent millions of dollars on the development and implementation of unmanned weapons, we have sent men to the moon; and the best and brightest minds in the world can’t figure out how to stop millions of gallons of oil from spilling into the ocean?  Really?  There was no back-up plan, no emergency shut off valve, no “what-if” scenario?

Last night I watched Red Gold, a documentary about the controversy of the Pebble Mine.  The citizens of Bristol Bay, Alaska are threatened with the loss of their homes and their livelihood if the permitting of the world’s largest gold and copper mine, by British mining giant, Dynasty, is allowed.  Executives from Dynasty repeat over and over that the potential rewards outweigh the risks; that the 10 billion tons of waste materials created by the mine, at the headwaters of the largest salmon run in the world, won’t impact the fragile habitat of the spawning fish.

Let us use the devastation of Gulf, the millions of gallons of oil spilling into our ocean, killing our wildlife and coming to shore in the form of tar balls as a reminder.
The rewards do not out weigh the risks.
Our earth is fragile.
A gallon of gas should cost us about eight bucks.


What we have should not be take for granted.

Big business should not make the rules.

It is about time more of us followed our President’s lead and got FURIOUS.