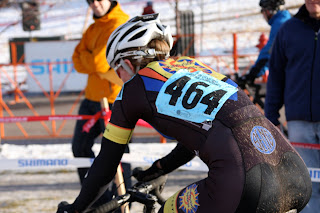 Sleep comes with difficulty.  The road rash decorating my hips and elbows alerts me to even the slightest movement against the bamboo sheets.


Between these harsh awakenings, I dream of an asphalt corner, covered in ice.  The same backdrop repeats itself in my mind, but the movement in the foreground changes.

I am riding the Cyclocross Nationals Course, lap after lap.

Lap one I am railing the corners and the off-camber sidehills; I make not a mistake, lose not a second, I ride the course clean and smooth.

Lap two I make mistake after mistake.  I brake where I shouldn’t, I take bad lines in the corners, I slide down the stairs.  I am a disaster.

If the road rash hasn’t woken me by now, my nightmare does.

I am restless and uneasy; I think back to events that have transpired just a few short days ago.  While some memories are clear and vivid, USA Cyclocross Nationals as a whole seems like a milky daydream. 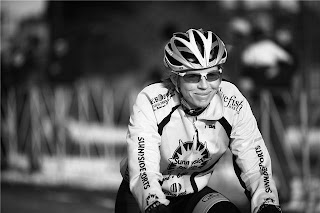 It is Friday afternoon.

I stand on the starting line, waiting for the gun.

I have dreamt about this moment.

I have trained for this race.

The next 40 minutes will be a test of physical ability and mental toughness.  An all out, nothing to lose, put-it-all-on-the-line kind of race.

The sun is out and the earth is starting to thaw from a deep artic frost.  The course is lined with spectators.

I stand in the 2nd row; called up behind some of the strongest women in the sport.  We wait, listening to instructions and preparing for the start of the Women’s Masters 30-34 race. 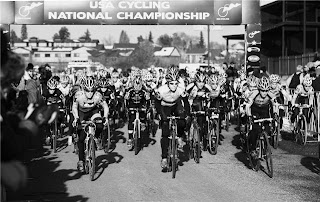 The gun fires, shoes the clip into pedals, quadriceps engage, pavement moves swiftly beneath the pack of riders.

I make the first turn, narrowly avoiding a pile-up and standing up to chase the lead group.  2 minutes into the race I hit the hard, froze ground on an icy corner, swear out loud, but recover quickly.  After that, I don’t remember much.  The am racing against some amazing women.  Perhaps, one day, I will be one of the amazing among them. 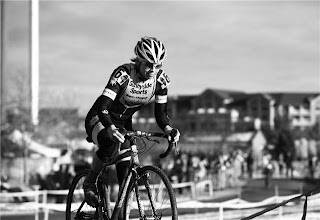 Lap after lap, I am passing girls.  The crowd on the other side of the tape is like nothing I have ever before experienced.  Voices, familiar and unknown, are yelling my name.  I know I am in 13th place, only because someone is counting and lets me know as I ride past.  I do not know how many laps we have ridden, nor how many more we have to ride.  It doesn’t matter.  My legs are strong, my breath under control, my eyes focused on the course ahead of me.  I am continually gaining ground on the girls in front of me.  I pass Emily Van Meter and get a gap.

With two laps to go, I finally look at the lap counter as I ride beneath it; just behind Kristi Berg.

A smile begins to creep up into my throat when I realize I am riding my way into the top ten.  I am gaining ground on Kristi, who is currently in 6th place.  On the backside of the course, I attack on the hill.  I pull in front of Kristi, holding on to the lead for all of about a minute.  When she launches a counter attack I can’t hold on.

The final lap is as blurry as the pervious five, but as I round the final corner, head down, pushing toward the finish, I am glowing.  I have just ridden my best race of the season.

7th place is what the official results report, but I feel as though I have just won.   Ben is at the finish line, along with my father.  The smile on my face tells the story the best and thanks to PDX Cross, it was captured beautifully. 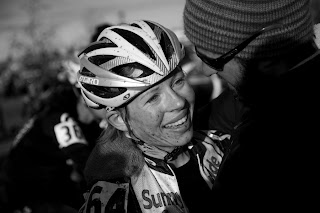 I find Veronica; an amazing women with so much to teach me and pummel her with a bear hug.  Team Sunnyside was well represented on its home turf.

For the first time all season I don’t second-guess the race.  I don’t think about what I could have done better or what mistakes I made.  I am just happy and enjoying the moment.  I am elated.

Sunday I lined up with (or better said, behind) the best women cyclocross racers in the country.  The first row was stacked: Katie Compton, Amy Dombroski, Mary McConneloug, Meredith Miller, Sue Butler and Alison Dunlap to name a few.

The number pinned to my skinsuit was 55.  I started right in the middle of the 105 rider pack.

I had stepped up to that line and before the gun was even fired, I felt like I had accomplished something.  I

had earned the honor to be standing among these women.

Hands in position, butt on the saddle, right foot in the pedal, left foot pointed, stretching to the ground.  The gun fired and the sprint for the hole shot was on.

The first few laps unfolded brilliantly.  I felt like I had just picked up where I left off on Friday.  All I could hear was muffled noise.; my name being shouted by unidentifiable voices.  I saw only the course, the girls in front of me, the stairs, the barriers, changes in terrain.

I was focused and racing on the edge.  I was following Ben’s advice, Race like you’re crazy.

Working to pick off the girls in front of me and to hold off the ones behind, I rounded an icy asphalt corner like I was invincible.  Before I could comprehend what was happening, I was back on my bike.  Right arm and hip on fire, right brake lever bent inward making braking difficult, shifting almost impossible.  An attempt to correct the damage failed and remembering I had a bike and crew in the pit, I relaxed and hammered the pedals toward the pit.

The rest of the race was a cluster of errors and miscalculations; a pit bike I was unable to shift, another fall, failing confidence, a lap of my own personal hell, visions of quitting, seeing girls in front of me that I hadn’t finished behind all year. 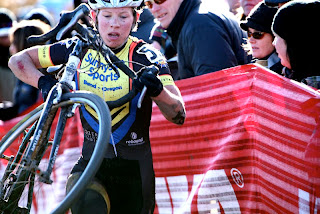 After each calamity I chased to reclaim my position, but after having to replay this sequence one too many times, I couldn’t make up all the ground I had lost.

The final lap and finish line came as a torturous, yet welcome relief and the commencement of my cyclocross season.  The finish shoot was crowded.

With eyes toward the ground and bleeding elbows, I made my way to the back fence.

I could only cry; thoughtlessly, selfishly, and self-pitying.  Ben and Mom found me; wrapped up in my own self-wallow.  I had failed.  I had disappointed.

But only in my own mind.  No one else was disappointed, no one else saw me as a failure.  They loved me just the same.

I finished 52nd in the Women’s Elite Nationals Cyclocross Race, with mishaps and mechanicals.  Get over yourself.

The lessons from Sunday’s race are slow to sink in, but with each passing day I see them more clearly.  The smile that covered my face on Friday afternoon is reappearing and I am reminded of the accomplishments of the year.

There is a fine line between racing on the edge and stepping onto the other side.  Without flirting with that line, full potential will never be achieved.  On Sunday I found that line, road right on it, and then, stepped over.  I will be a better cyclist because of it.