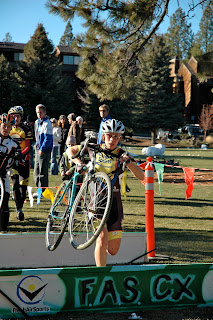 Saturday morning I was up with the sun, heading out to the Inn at the Seventh Mountain to help Gina and the FreshAirSports crew get ready for the second Crossaflixion Cup race in Bend, Oregon.

It had been 3 weeks since I had stepped up to the starting line and the fabulous workouts that Damian has been assigning me are my only reminder that Cross Nationals are only 2 weeks away.

A week of easy road riding while on a Pre-Thankgiving Trip to Maryland made me forget the 60 minutes of pain I have come to know as Cyclocross and helped me to recall the deeply rooted reason I love to ride my bike.  Empty roads, autumn leaves and the feeling of freedom that only two wheels turning under your own power can give you.

But back to Cross…Saturday’s course was super fun (thanks Brent).  Covered partly in snow, the course was mostly flat, with a couple of good kickers, a couple of curbs, and some twisty turns on the backside.  Turn out for the early races was strong and as the day went on, registration for the Men’s Elite field was looking pretty stacked; Ryan Trebon, Barry Wicks, and Ben Thompson all turning out to ride around in the Bend Sunshine.

Team Sunnyside was out with strong numbers and loads of smiles.  Renee took the overall Women’s race, beating out Tina Brubaker for the win with a blazing fast last lap!  Humble, solid, and determined, Renee rode hard, smart and skillfully and I was thrilled she got the win and a write up in the Bulletin and in CX Magazine.  Nice Work!!

As for me, I raced with the Men…. Both Heather and I did; making it easier for Gina to race and act as race director.  I rolled up to the startline with not 5 seconds to spare and didn’t even have time to be nervous.  I was excited to be racing and wanted to try out my legs.  The last time I raced was at PIR and I was tired.  Saturday I was well rested and my legs felt great!

The boys from Kona went off the front within the first quarter mile and the rest of the field got pretty strung out during the first lap of the race.  I was ridding hard and having fun. 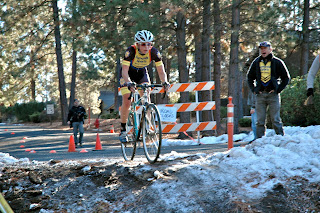 There was no pressure, I as just racing for a good workout and to enjoy being on my bike.  I was smooth over the barriers, loved the downhill kicker and stayed upright for the entire race.  The off-camber snow hill took some wind out of my sail ever single lap, as I tried to find the best line.  It wasn’t until the last lap that I felt smooth around that corner. My technical skills are in constant need of improvement and it was fun to test them out without being worried about Megan or Rhonda or Erin making a move if I missed something.

I have four races left…. The USGP races in Portland and CX Nationals.

The countdown has really begun.

In April, Damian took me out for my first 20 minute test.

You are training for the next time it snows… 10 months from now.

That was 9 ½ months ago.  Nationals are in 2 weeks.  I certainly hope it snows.