StarCrossed and Rad Racing - Cyclocross with the Big Girls

Think back to your first day of high school.  You thought you were pretty hot stuff; lockers, varsity letter jackets, off campus lunch, homecoming football games.

Sporting your brand new Jansport pack and Converse kicks, you stepped off the bus and strolled right through the main doors; toward the Senior lounge.

Then it hit you.  You just smacked your head on the bottom rung of the social ladder.  The only thing anyone else thought you were good for was being stuffed into a garage can or locker.

This is quite similar to the experience I had this past weekend at Star Crossed as I awaited call-ups for the Elite Women’s Field.   The first big UCI Cyclocross race of the season, a lot for the heavy hitters were on the Star Crossed confirmed rider list; UK’s national champion, a 4-time US National Champion, a Canadian Olympian.

Last year I raced Women’s B.  This year I have raced the local Thrilla races.  Standing there, among these amazing athletes, I second-guessed by decision to buy the UCI license and race with the big girls.

What was I thinking?

Just after 7pm, the UCI Official started calling out names; the names of women I have been reading about on cyclingnews.com, velonews.com, and cxmagazine.com all summer. Four rows back, my name was called, I took my place and looked around me.

The pistol fired and the women at the front looked like they had just been shot out of a cannon; I struggled to comprehend the speed and at the first corner I was dead last.

On the first straight away, I passed 2 girls.  Okay, calm down. You are okay.

I could see a couple turns in front of me; Helen, Sue, Alison, and Alyson were off the front, a large chase group followed….. then there were the rest of us.  I passed couple other girls going over the logs and finally settled in.  The Star Crossed course was mostly grass, some asphalt and a short bit on the Group Health Velodrome.  The corners were tight and fast and I lost time by slowing down too much on the 180s.  There were 4 or 6 girls all pretty close to me.  On each straight away I stood up, gaining ground on the girl in front of me, sometimes passing her, only to get passed back once we hit the more technical section.  The leading group was quite a ways in front of us, but didn’t seem to be increasing their lead too quickly. 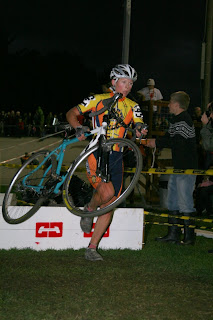 The first time I looked at the time clock, we were 23 minutes into a 40 minute race.  I had pulled out of my right pedal twice and lost my chain once.  I was racing smarter now; somehow calmer.  I quit making so many little mistakes and started working with the few other girls around me.  I would lead for a while, then get over taken on the technical infield section, sit on the wheel in front of me as we rode around the Velodrome, and then move into the lead after the barriers.

With two laps to go, the pace picked up and everyone was wrestling for position.  I had my eye on a Black Mountain Cycles jersey in front of me; catching her on the back portion of the course, only to let her get away on a slick corner I didn’t trust myself to ride too fast.

I put some space between me and a couple of other girls on the last set of logs and sprinted through the finish 3 seconds behind Black Mountain.  Yes, I said sprinted.  No, there wasn’t anyone right on my wheel and no, I didn’t think I could catch Black Mountain, but I wanted to sprint.  This was a race; aren’t you supposed to sprint at the end of a race?

I soft pedaled and rolled back to the starting area where I had left my jacket.  I didn’t know what to think about my performance; I finished 21st out of 28 (there were 3 DNFs). I was disappointed, but I didn’t give myself anytime to really think about it.  The rain started to fall about then and I wanted to get changed and ready to watch Matt and Scotty race in the Men’s Elite Field, along side Page, Trebon, and Powers.

Sunday’s race, Rad Racing GP played out about the same; a humbling call-up, a super fast start, wicked fast pace; only this time I felt a little more “in it”.  I hung with the large chase group for the first half of the first lap until we hit a sketchy downhill section, where I used too much brake and got dropped pretty fast.  I scrambled to narrow the gap on the flats and the climbs, catching a number of the girls on the uphill section only to get dropped on the downhill.  This is the way the entire 40 minutes played out.  I ended up 18th out of 23; disappointed because I think I could have pulled out 15th place, but pleased that I felt like I had raced.

It is the beginning of long season.  Only my second season of racing.  I took a big step; moving from the Cross Crusade B field to the UCI Elite Field.  I am not making any excuses, I have a lot of work to do; but what I take home from this weekend is a awakened motivation, a fierce desire to ride fast and to ride well, and to train to the best of my ability in order to maybe, one day, be at the front of that pack instead of the back.

Check out videos of both Star Crossed and Rad Racing Here