A tour around the Strawberry Mountains…………

The weekend's plan was to ride a 100 mile loop around the , camping some where in the middle.

The weather could not have been better, warm and sunny – just hot enough to know it was summer.

I was riding the Yeti, Ben on his Lemond; each of us pulling a Bob trailer. Brad and Dana were cruising on their fully loaded Long Haul Truckers, built specifically for touring and their upcoming 7 week bike tour. I have to admit there was a hint of jealously here; beautiful bikes built for the long haul…… 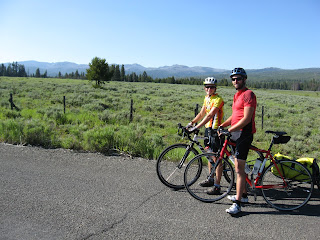 Early Saturday morning we loaded up and headed out, driving east toward . Brad, Dana, Ben and I were ready to roll, literally.Bikes, trailers and smiles, we rode out of John Day, Oregon just after noon and headed east toward Prairie City.

The first 10 or 15 miles were along Highway 26 toward ; amazingly good riding. Wide shoulder, little traffic, and the energy you have when you first get on your bike after a long car ride.

Our first small-town-stop was in for a cold drink. No, we didn't really need to stop, but that is the fun of touring; you get to stop when ever and where ever you want. No time limit, no bike computer, no heart rate monitor. Just a paper map and a group of friends; riding along for the sake of riding. 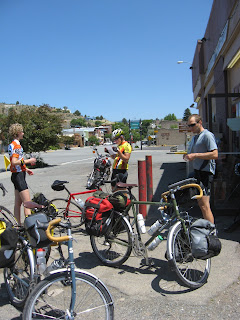 Leaving we turned south, off the main road and onto paved forest service roads. Narrow roads with few cars meant we could ride 2 abreast and chit-chat as we made our way along the .

Another beautiful thing about bike touring and only having a road map is that the topo lines are almost non-existent so determining the grade and terrain is near impossible.

Note: I describe this as a beautiful thing, others might disagree.

The grade flattened out a bit as we approached Trout Farm, a campground maintained by the Malheur Country Forest Service. Hoping to find water, we were pleasantly surprised by a piped spring providing fresh, cold libation. Filling our water bottles and checking the place out, we discovered why they call it Trout Farm. The lake at the far side of grounds was filled with huge trout; jumping, swimming, and thankful Ben had left his fishing pole at home.

The climb continued and got much steeper as we got closer to Prairie Summit. Well worth the climb, Prairie Summit was true to its name, open fields, wild flowers and fresh air. By the time we descended the 1000 feet into , we were ready to rest for the day.

After reaching the Big Creek Campground and finding it full of RVs and ATVs, we ventured a short way down a gravel side road, finding an ideal camping spot; sheltered from the sun and covered in pine needle duff. We unloaded the trailers and got back on our bikes – we had spotted a swimming hole down the way and weren't about to miss the chance to take a plunge into the icy water. 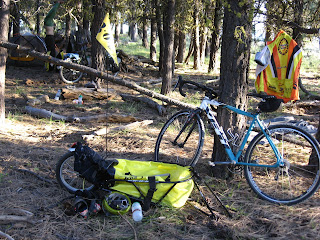 Dinner: Pasta all around.

Sunday morning I went to church. My church. The church I share with all outdoor lovers who get high off fresh air, open space, and riding bikes. And I rejoiced!

Continuing through the , the cows are already awake, the horses were grazing and the sun felt amazing as it warmed my back. The roads were empty, save 4 cyclists adorned with smiles and the miles ticked by too quickly. Another climb, although not as tough as the one previous, ended in a sweeping decent that had me laughing and grinning ear to ear. I tried to keep up with Ben, and succeeded, finally figuring out the trick of going 30+ with a trailer in tow. 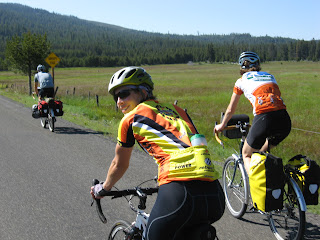 The plan was to stop in Seneca for a second breakfast and a coffee…. Sure they must have a café. Seneca was in bold on the map after all.

Lesson Learned: Maps can be deceiving.

Seneca turned out to be a one-shop town, a rickety little convenience store that sold ice cream sandwiches, a lot of meat, and Powerade. After picking up a few essentials, we found a picnic table in what looked to be the city park and enjoyed the dregs of our cheese, crackers, and peanut butter. A true feast!

Tip for the road: When carrying cheese on a bike tour or backpacking trip, wrap it in a brown paper bag before putting it plastic. You will be glad you did. 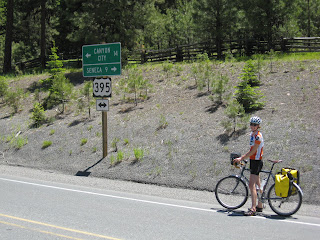 We left Seneca and the road turned up as we climbed out of one valley, headed toward another. We crested the next summit, Brad and I pushing each other as we reached the top, before starting the best downhill I have ever ridden. I can't wait to go back. In fact, it would be worth climbing all the way back up to experience it again. The views were breath-taking; the to our right, the up ahead, the vegetation lush and green, the air was fresh. When the road flattened out and we regrouped, we were all smiles. 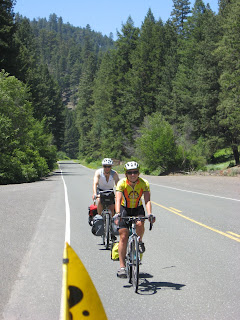 The ride through and into was right along the river, between canyon walls, among friends.

It was Sunday afternoon, there was no other way I would have rather spent it.