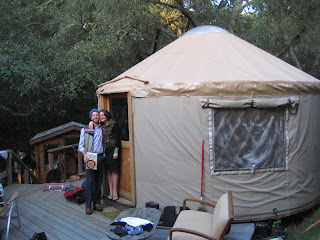 A bold reminder of just how much we have to be thankful for......... following is a letter from a dear friend who lives in a peaceful yurt just outside of Santa Barbara.

Just wanted to check in with you all. Melissa and I are safe, our yurt is still standing, and the Jesusita Fire still smolders along less than a mile from our house, the third major fire in Santa Barbara since July. Now after five days it is nearly contained, about 80 homes destroyed and 9,000 acres of the front country I drive through every day scorched.


What kind of lessons are to be learned? We can choose to be victims or we can understand that events happen for us, not to us. For me, it was yet another reminder that things don’t matter, and as a community we are stronger for the experience. Three days into the fire, after long days of logistics with the Red Cross in setting up our emergency shelters and evacuating our headquarters, the winds changed and the fire ravaged up the mountain towards our little home under the oak trees. I hadn’t been there since the fire started several days before, but made it back before the flames closed off the road, pulling into the driveway and seeing the 7 beautiful people that Melissa and I share this land with, all of them sitting on the rocks and watching the oncoming flames. We held some beautiful moments that I thought would be the last moments together on that healing piece of land we call home.


I was there to pack. Down the trail to the yurt I felt calm and collected, a man with a job to do and the confidence to get it done with grace. I said goodbye to so many things, to the outdoor shower, to the new shelves I just put up and all the beautiful glass jars that line the insides of our tiny little kitchen cabin. Inside the yurt I packed a small load of my favorite books, clothes, and practical things for what I thought would be a future without a home. All that light-weight packing I’ve done for my travels came in handy as I took only small things, a few good shirts and pants, some photos, my grandfather’s cufflinks, and felt relieved to see all the rest go. The essentials just stood out and everything else seemed to be in black and white. Home Depot tools that never really worked well, old work pants that just took up space, free stuff that I probably shouldn’t have thrown in the back of my pickup. It was a relief knowing these things that surround me about to be set free to the sleeping giant that had just woken up in our backyard…


We loaded up Luna’s precious things too, and went in to give Gregory, Jason, Mari, Ishmiel, Patra and the boys goodbyes. They were having a last supper, with chicken on the grill and apocalypse about two miles away. It was beautiful. We all have different ways of dealing with things, and there should be space for everyone to do as they choose. It reminded me of the symphony playing as the Titanic went down, but I was on the team that needed to help take care of all the people fleeing on lifeboats.


When I came down the hill flames were jumping over the highway as we took the last back-road possible towards town. My job at the Red Cross is to help plan and prepare for disasters, so this really was the moment I had been waiting for. When we got back to the temporary HQ, the sherrif’s department had just told my boss that Santa Barbara was completely f’d, so I started gearing up to manage the biggest shelter we had in the county while Melissa got started registering people. Flames were breaking out everywhere and 30,000 people were under mandatory evacuation. Panic and ash—everywhere. Over the next few hours there was such a river of evacuees coming in for relief that we quickly ran out of cots and blankets. So many elderly came in the doors that we had to wake up healthy-looking people and ask them to lay on the floor for the seniors to have a cot to sleep on, probably the toughest job I’ve ever had. Imagine walking up and down the isles of cots with the twisted power of asking people to give up their bed when they might have just lost their house. After repeatedly demanding more cots at the shelter I was told that the entire city might be evacuated and that priorities were shifting from getting people cots and blankets to simply getting them a bottle of water and a roof over their heads. The news felt like I had fallen on my face. All of Santa Barbara was on its way over.


In the end, only six hundred showed up, and by the time I met Melissa to sleep in my truck at 6am it seemed we had avoided the worst predictions. It really all felt like a dream. At one point I visited the health department’s special-needs shelter across campus to plea for spare cots or blankets for my people. It was another world entirely. I had just come from a place where I was ripping off pads from volleyball poles to give desperate folks something to rest on and before me were a hundred unused cots and blankets, the room quite, calm, and serene…then I was told they were all reserved for law enforcement that were going to be arriving later. I felt like a dad begging for food for my kids at a soup kitchen after hours. The guy gave me half a box of blankets and I looked him in the eyes and said, “I’m asking you one more time for the rest of those blankets.” It was an intense moment, I felt like Clint Eastwood.


Just before sunrise the rest of the cots showed up, and by morning everyone was asleep in their own bed. I still didn’t know if our home was standing but in a way was too tired to care. A few more nights of waiting and we heard the good news. Now the roads are open and Melissa and I are home, tired, but safe.
Newer Post Older Post Home