To Opal Creek, With Love 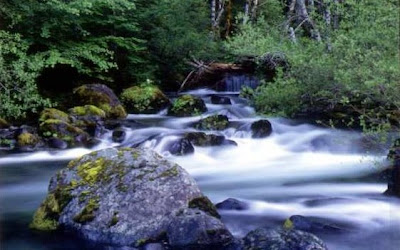 This weekend I didn't race, I didn't train, I didn't even get on my bike. A much needed deviation from the routine, I enjoyed myself, among friends in a place, that four short years ago, set my life in a whole new direction.

We make a million tiny decisions each and everyday. Most pass by without any apparent implications. Once in a while we notice the consequences. But for the most part, our lives take form as a result of the accumulation of the tiny, seemingly inconsequential happenings. And then, something changes. You make a decision that has a pronounced effect; on you and the path your life will follow.

Four years ago I visited Opal Creek for the first time. Nestled three and a half miles behind a locked Forest Service Gate, beneath an old growth forest and along side the little north fork of the Santiam River lies JawBone Flats, an old mining town turned environmental education center.

This is where I met Ben.

Working as winter caretaker, along side the gentle giant, Adam Mims, Ben welcomed me to town and gave me the guided tour of the property… 17 buildings, an off-grid hydroelectric pelton wheel, the workshop, the swimming hole. With patches of snow lingering in shadowy corners, we all went swimming. The plunge into the icy water below was more than a dunk in unbelievably cold water, it was one of those decisions.

In the months that followed, we feel in love, while sitting on the rocks just above Staff Pool, we spoke the words and made plans for the future. Naive and optimistic, we swam and hiked, and picked huckleberries.

Meanwhile I was tying up business in Portland so I could spend the winter in Jawbone. I sold my house, quit my job and left the city for a drafty mining cabin in the woods.

I left the life I knew without hesitation; I knew it was the right choice, a consequential decision.

For the next 6 months, Ben, Adam, Pete and myself lived and worked in Jawbone. The snow fell, the hydro broke, games of cribbage and Scrabble were won and lost, we read books, baked bread, and played music. When spring came, Ben and I, through streams of tears and embracing hugs, left Jawbone to hike the Pacific Crest Trail.

We have visited Jawbone many times since our departure in the spring of 2006, but returning there this weekend was of great significance. Adam will be leaving Jawbone after 6 years of residence; a celebration was held in his honor. Jawbone was filled people I care about, with people who have helped to shape my world, with people who genuinely know me.

Saturday the snow fell, adding to the white wonder that already covered the ground. The trails had not been broken and snowshoes were necessary for exploration out of camp.

Through knee deep snow, I walked along my favorite running trail, the Kapeski Loop. Past Opal Pool and along the river; four years ago I walked this trail for the first time. My feet have passed this way countless times since. So much as changed, yet so much remains the same. Without regret I look back on the past 4 years, without expectation I look forward to the next.

Each day a gift, each choice a step, just one life. The real decision remains to made…… how will I choose to live it?
Newer Post Older Post Home