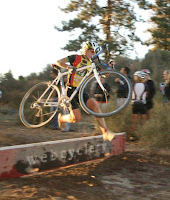 The Thursday night Thrilla cyclocross series, put on by Webcyclery, began on Sept 4th, the first race of 4 in Bend. About a week before, I decided to go ahead and give it a whirl - why not right? My friend Renee said it was "so fun", so after 2 clinics and a new, used bike (purchased on Monday before the race) I was all set. All race categories began at 6pm, with about 15 second between each start, meaning we

were all racing on the course together. At the starting line, I hung back, not wanting to get in front, as I really didn't have any idea what I was doing... but as the race got under way, I was passing people, and was soon ahead of most of the women and slowly picking off the Men in the Master's race. Of course, I was also being lapped by the likes of Ryan Trebone and crew (professional world class racers that just happen to live in Bend and started about 30 seconds before the Women's category). With each passing lap and with the helpful motivation of my friends yelling my name, I became more and more confident around the corners and over the barriers. When the offical told me I had 2 more laps to go, I was somewhat relieved (you race for 45 minute 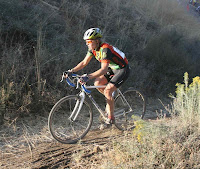 s and then have a certain # of laps to finish, dependant of the guys in first place) as I had been racing full out for 45 minutes. I was a bit tired and made some mistakes in the corners, but held on, passed a couple more folks and finised in high spirits - I was covered with dust, had broken a my left pedal half way through, and was now offically hooked on cyclocross - I can't wait til next week.

When the results came out later in the week, I learned that Ben had counted correctly and I finished 3rd for the Women...... but not too far behind 2nd place.......now the pressure is on.
Newer Post Older Post Home