It's A Team Effort. 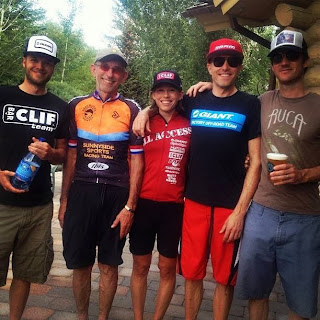 The weekend of July 4th, I was prepped and ready for Marathon Nationals.  All year I had trained for this race. I had raced numerous 4+ hour races and spent more hours in the saddle than ever before. I was ready and I was confident. The race unfolded over the course of two laps and a couple three hours; an infinity of emotion and one focused goal. In the end, I finished in second place, behind 3x champ, Pua Mata. Elated, I stood on the podium and looked out in the crowd to see the faces of my friends.  I rode smart and smooth and strong. I had put in the work, and that work paid off. But it was a team effort. One of the faces in the crowd was Brig, my coach and my friend.


In late July, I raced High Cascade 100, a 100 mile mountain bike that I won by more than 45 minutes.  In August, I went to Idaho for the last race of the Ultra Endurance Tour and with a second place finish, took the series win.

Three weeks later, I wanted to be a cyclocross racer.  All year, I had been training my body to put out long, steady efforts and now I wanted it to be able to sprint and attack, and race well for 40 minutes instead of 4 hours. I was asking a lot of myself and of Brig. At the time, I didn't think much about the radical shift of demands, but hindsight, well, it was a radical shift.

Two weeks ago, I won the Oregon Cyclocross State Championships, and this past Sunday, I won Cross Crusade #8 at Barton Park, locking up the Cross Crusade series against strong and fierce competitors.

I have four more races on the calendar this year, four important cyclocross races, and I know that I will be fit and ready for each one of them.   I know this because I have 100% confidence and trust in the plan. Deliberate, scientific and in tune with me, as an athlete and a person, I trust Brig completely. The accomplishments of this year would not be possible without his guidance and support and I can’t thank him enough for his patience and dedication as I develop as a cyclist.
Newer Post Older Post Home