The rain started falling Thursday night. The moon dust began to settle and by Saturday morning, the trails, that were dusty and loose just 48 hours before, turned to sweet, tacky, single track. Perfection.


And it kept raining, and hailing, and then the sun would come out, but only for a few brief moments, before once again hiding behind the bank of clouds that were swiftly making their way across the sky. June in Central Oregon – unpredictable and oh, so favorable.


Saturday morning I headed up to Wanoga, for a pre-ride lap and then the USAC Oregon State Championship Mountain Bike, otherwise known as the Oregon Qualifier. Because Oregon has OBRA (how very lucky we are), we are unable to “qualify” for nationals at any of our races. To work around that, Bill Warburton and Mike Ripley – in conjunction with The Bend Endurance Academy, put on a USAC race the day before Pickett’s Charge! This way, we Oregonians can qualify for Nationals without traveling to Northern Washington or California – it is rad.


So, I qualified for Nationals and in the process became the Oregon State Champ – sweet! But the real race was Sunday morning- PICKETT’S CHARGE!


I had been thinking about this race all season. The course is fast, with a few technical sections and a couple of lung-burning punchy climbs. I really wanted to win this race. It is here, in Bend. Home turf. Ben was going to be there. My friends and teammates were going to be racing. I won last year and didn’t want to lose the title. But, I had my work cut out for me.


We lined up in the rain. It felt more like the start of a cyclocross race than a mountain bike race. I smiled, knowing how good the trails would be.


The pace was fast from the gun and Sue and I moved to the front on the first climb of the start loop. We road together for the first couple of miles, the pace felt fast, but comfortable. I was right on Sue’s wheel when she clipped a pedal on a rock and went down. In an attempt to avoid rolling over her rear tire, I
went down too. After a quick, “Are you alright?”, I grabbed my bike and was off.


I didn’t look back, I just rode. Staying calm and focused, I rode as fast and as well as I knew how. I felt good on the down hills and smooth on the climbs. I made a couple of small mistakes, but didn’t let the distract me.


I came through the start finish, one lap down, one lap to go, I was in the led – but I had no idea by how much. I was excited, but still had a long way to go.


I started the second lap and gave myself a couple of reminders.


These words must have worked because I held onto the lead and cross the finish line first.


A few friends were at the finish, recovering from their efforts . It was so nice to see so many smiling faces and belong to such a supportive and inspiring community. 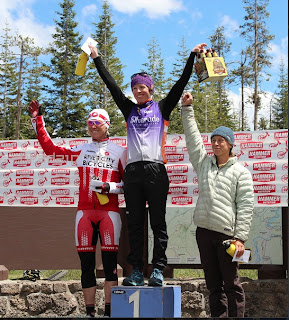 Big thanks to Team Sunnyside for putting on a great event and to Bill Warburton and Mike Riley for all the work you do to make mountain biking in Oregon full of AWESOME!
Newer Post Older Post Home