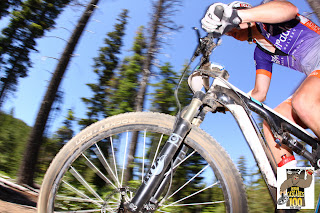 106 miles is a long way to ride; and a very long way to race. But the recovery time from this endeavor is much shorter than that of a Race Sweeper. 3-6 weeks shorter, to be more specific.


Last Saturday Mike Ripley put on one hell of a race. The High Cascade 100, which turned out to be somewhere between 106-108 miles, but who’s counting? It was tough; hot and long and taxing; mentally and physically. I raced well, followed my nutrition plan until mile 75 until all I wanted was chocolate milk, and finished in 3rd place, 8.5 minutes behind Alice and 25 behind Amanda Carey.

The hardest part of the race came after I crossed the finish line. I was ready to get a hug from Ben and lay down in the shade; instead I learned Ben had been taken to Urgent Care. Ben had been “sweeping” the first lap of the race course, pulling flags and making sure all the racers were well on their way when he went down. HARD.

As fate would have it, the accident occurred just above the 4610 road and a few of our good friends just happen to riding by. They took good care of him, drove him into town, stayed with him at Urgent Care, and watched over him until I got back to town and retrieved the poor guy. Ben suffered a AC shoulder separation, a fractured radial head, a sizable left shoulder gash, and a concussion. His Lazer helmet cracked in two places – and probably saved his life.

This week has been a long one. Saturday night, I had to wake Ben up ever two hours and make sure that he knew where he was and that the concussion wasn’t turning into something worse. He was fine through the night and we spent most of Sunday resting….. Monday we were back at the doctor, to make sure arm bones were in the correct position and wounds were healing well; which they were.

Ben has been taking it pretty easy, trying to rest his brain and his body. I haven’t been sleeping well, a bit worried about turning over and landing on Ben’s arm, I suppose. My legs are finally feeling like themselves again, but my post-race recovery has certainly taken longer that I would have liked.

I will not pretend that I was having fun during those last 20 miles of the race, because I wasn’t, but as soon as I finished, I thought about next year and perhaps doing more than one 100-mile race. It is hard for me to let go of mountain bike season….. I have fallen in love with the Little Fish and riding single track and challenging myself to improve my technical abilities. I don’t have any more racing on my calendar until cross season and my favorite riding buddy is out of commission for a while.  Meaning a month of recharge, long rides, lazy mornings and time spend with Ben, who is sure to be himself again soon.