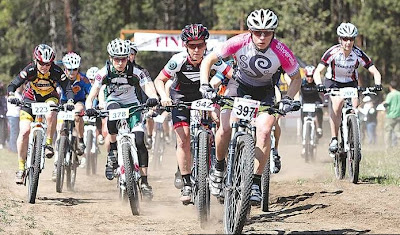 Sunday morning, I woke to brilliant sunshine; a stark contrast to the gray skies that brought snow just the day before.  Breakfast, coffee, and a little Wall Street Journal and I loaded the VW with a few of my teammates and headed out Highway 20 for the Sisters Stampede Mountain Bike Race.
The Stampede is known for its party-like atmosphere and this year they didn’t disappoint.  The BBQs were already going when we picked up our race plates.  I warmed up on the course, shed my layers, downed a Clif Shot and at 10 minutes to 11am, headed to the start line.
I was anxious about the race.  Last year, I didn’t have my best performance in Sisters.  The lava rocks and I didn’t get along so well, but I have been working on this relationship and we are beginning to enjoy each other’s company.  Racing at home is always more difficult on my nerves than racing in the Valley.  So many people support me on a daily basis and, while they only want me to do my best, I want to do better than that.
Ben was at the starting line.  I was surprise to see him, and knowing he made the effort to come out to the race gave me an extra boost of adrenaline as we waited for the gun.
I made a large tactical error right off the bat.  My impatience drove me to the front of the pack and I led the race for the first 4.5 miles of double track.  Well, that was a waist of energy….. Right before the first single track, I dropped back behind Peggy from Idaho, the eventual race winner, and as I took the first, uphill turn, I lost traction in the loose soil and went down.  The train behind me quickly passed and I struggled to unclip, reclip and get moving again.  Panic hit and I had to consciously calm myself down.  Panic doesn’t help when riding over lava rocks, so I made myself settle down and breathe.
I started the chase, but mentally, I was not in a good spot.  They were riding away from me, I had lost the race.. in the first turn.  This type of negative self-talk is extremely destructive and I tried to push these thoughts out of my mind, but I was disappointed in myself.  There where moments of Just give up, quit trying, you crashed, on an uphill, dumb move, you lose.  But, I was racing at home, I knew this course and I had ridden it well the day before.  Why do I train each day?  To just give up? Absolutely not. 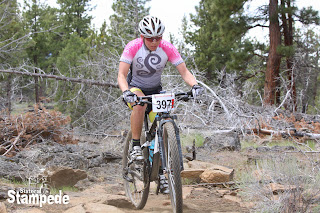 Refocused and determined, I charged forward.  I passed a couple of guys and with that, got some of my confidence back.  Toward the bottom of the first lap, I got tangled up with another ride who was attempting to pass me on a pretty narrow section of trail and went down again.  This time I went down hard, and it hurt.  I threw my chain back into place; my adrenaline was rushing and I was fired up.
The second lap of the upper loop, I rode almost entirely alone, passing a few folks who were incredibly gracious to pull off the trail, letting me move on by and reeling in a few of the guys who had previously got a gap on me.
I rode the lower decent better than I had before and really felt like I was flying.  Then I saw the girls I was chasing.  Shawna and Brenna were climbing, together, up the shale and loose rock that was the final uphill section of the course.  I knew this section, GO!
I was gaining ground on the women in front of me, but I knew I didn’t have many more miles to close the gap.  Coming onto the gravel road, 2 miles from the finish, I was still a good ways behind.  I figured I had 10 minutes to the finish.
Ten-minute effort starts now.

Head down, I cut the gap in half in a matter of a minute.  There was a chance.  We turned onto the double track toward the finish and I caught Shawna and Brenna.  I couldn’t see Peggy, who ended up finishing 40 seconds ahead.  We crossed the stream and rode into the infield.  I rode smart and it wasn’t until the final straight away that I really went for it.  Shift down, shift again, stand up.  I crossed the line.  Smiling.
I came from behind.  I found strength I didn’t know I had.  I made mistakes, but I fought hard and was able to push aside the negative thoughts and self-doubt.  Before Sunday, I was convinced that if I got behind, I would never be able to catch up.  Once the leaders rode away, I should just settle;  too bad, go home.  Not any more.  Sunday’s race taught a lot about racing; about mountain bike racing, and about cyclocross racing.
Newer Post Older Post Home