6 years ago... The adventure begins 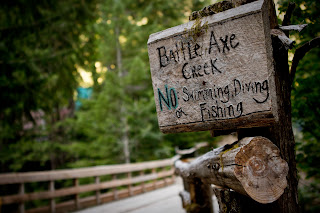 Six years ago, my life was very different than it is today. I worked for Patagonia, I owned a condo in NW Portland, Forest Park was my sanctuary. I visited the Forest daily; running as the sun came up, as the rain fell, as the leaves turned, as the trillium bloomed, alone, with friends. I ran because I found joy there; peace, clarify, comfort; because that was who I was; because it kept me sane.


And then, on an unusually sunny day in April, I took a trip to Opal Creek. On that day, my whole world changed. Even now, as I write these words, my eyes fill with tears. I am overcome. I don’t think that feeling that will ever change. I hope it does not.

The lush green beds of ferns, the blue-green swimming holes, the ice-cold, soul-cleansing water, the honest faces I met. How could I have known that the guy with the long blonde ponytail and rugged leather boots would marry Ben and I? How was I to know that the brown-eyed boy who was housing 12 chicks in his living room would become my husband?

The spirit of the place was intoxicating. It was April, we went swimming. And in the magically frigid waters of Battle Axe Creek, my spirit changed forever.

As the sun fell behind the ridge, email addresses were exchanged; good-byes given. I returned to the city. But, I left something behind in that place nestled deep in the woods. I left behind a part of me that wanted to stay, a part of me that would soon call the rest of me back.

I sold my house. I quit my job. I moved into the woods with the man I love, our best friend Adam, and our favorite canine companion, Minute Man.

My mom called me crazy, my dear friend Molly called me passionate, I called myself in love. We were all right.

12 months and a long winter after I first stepped foot into Opal Creek, I stepped out, for a grand adventure on the Pacific Crest Trail; with Ben.

A mutual dream discovered while sunning ourselves on a rock at our favorite swimming hole, hiking the PCT as something we both wanted to do. So, why not? What did we have stopping us?

I was warned that this was a plan destined to fail; that your whole self is revealed on the Trail, that we would break up. Perfect. The ideal test of a new and fledgling relationship.

So we did, together. And for four and a half months, we stayed together.
Walking in conversation and silence.
With trekking poles and running shoes, with our whole lives on our backs.
Being strong when the other was weak.
Eating pop tarts and snickers bars and treating our blisters with duct tape.
We learned quickly. About the Trail. And about each other.

On April 19th, 2006, Ben and I starting walking north from the Mexican border at El Campo, CA. Four and a half months later, we crossed over into Canada. We had reached the Northern Terminus of the Pacific Crest Trail. We could go no further, we were at the end. But for Ben and I, it was just the beginning.

Along our way, I attempted to keep a journal; an effort that started off strong, but quickly wilted under the exhaustion that comes with 30+ mile days. The best written record I have my experience on the Trail is in the form of emails sent to friends and family along the way.

Five years removed, I reread these letters. They are filled with memories; of fear, or emotion, of good fortune. Over the course of the next four months, I will share these letters once again, in unedited form, on that day, 5 years ago, that I sent them from library and coffee shop computers along the PCT.

I must express my gratitude to Samantha Kennedy for inspiring me to do this and wish her many blessings on her 2012 PCT journey.
Newer Post Older Post Home