Heidi Swift posted on twitter:
It's been raining for 2 months straight. Why aren't we racing #cyclocross? I'll trade shitty Sept sun races for a romp thru Feb/March mud.

My response:
We are. We did. We called it Hornings Hustle and it was muddy, torturous bliss. Heidi Swift, you should have been there. 3 hour cross race. Love.

Hornings was hard. Very hard. But it was also beautiful. It was the kind of race that tested the spirit as much as it tested the legs. I rode 21 miles in 3 hours. I think I could run faster than that. But I did not run, I rode. 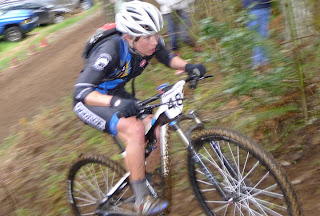 The Little Fish performed fabulously.  Equipped with Jones MudX Bontrager Tyres, Little Fish climbed up the sloppy-slop and held on tight as we descended Suicide Hill and numerous other descents that could have shared the same name.

5 laps of a 4 mile course. After 2 laps I was tired. After 3 laps I was toast, after 4, well, I had only one to go. The fifth time I passed through the start/finish area, there were no spectators, the parking lot was half empty, the majority of racers had gone home.

That was a long slog; but for some reason; I loved it. Probably for the same reason I love cross. Sweet, torturous bliss.
Newer Post Older Post Home