The Pumpkin Patch Was Good to Me; Heiser Farms and Alpenrose - Cross Crusade #1

Racing on the other side of the Cascades is a whole other ball game and last weekend was a great opportunity to test out my fitness and figure out if I really should be racing A's.  Two OBRA "A" line-ups  under my belt; two races I was proud of. 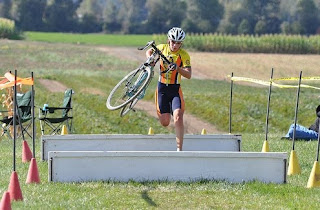 Small field, but a couple of tough competitors; the dry, dusty course suited me well. I was 4th wheel off the line and stayed there for the first half lap.  I felt like the pace was pretty slow and on the first long, uphill barrier set, I made my move.  I pulled in front and never looked back.  I continued to put time between and my two closest chasers as the 40 minute race unfolded.  With 2 laps to go, I had a pretty good lead and eased off just a bit.  Alpenrose, on Sunday, was the real goal.  I crossed the line, smiling – I won a race on the West Side. 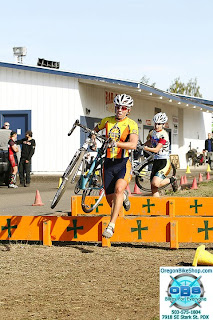 The big number of the girls racing at StarCrossed and Radracing also make frequent appearances at the Cross Crusade Races, and Alpenrose being the first and the largest of the Series, they were out in full force (with the exception of home town favorite Sue Butler who was racing in Gloucester).

Given I was a B last year and this is only my second season of racing Cross, or bikes for that matter, I feel like things went pretty well.  But given that I am pretty hard on myself, I wanted to do better.  I think I could have placed 6th, beating the girls in pink, if I had played my cards right.  I beat 7th place on Saturday by a fair bit; I should be able to do it again.

I road hard the first half of the race and was right there with Emily and Rhonda and the Gentle Lovers.  Emily and Rhonda found a couple more gears that I just didn’t have and I got gapped – bad move.  I did not feel good about this.  The gap kept growing and I was fighting my way between 7 and 9th place.  With 2 laps to go I should have gone “all-out”.  Instead I waited until the lap board read “1”.

We raced for 60 minutes, along side the Men’s As.  60 minutes is a long time to race; but with long laps, great crowds and lots of cowbell, the race was over before I knew it.  Kacy, Andrew and Max came out to cheer and had their first taste of CX.  Having them there was awesome; they found the run up, heckled with the best of them and looked to be having a great time.

Alpenrose is why people love to race cross… let the Crusade begin.

Check out this short video from the Cycling Diaries and get a better idea of what Cross is all about!

NOTE: Team Sunnyside Had a great showing and we are currently in the Top 10 for the team competition. Matt and Don both posted race reports.