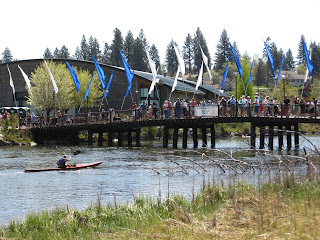 This race is a big deal in Central Oregon. Some people call it the Bend Olympics.  Racers put unbelievable effort and countless dollars into training, equipment, and costumes; all to ski, skate, ride, run, and paddle from Mt. Bachelor to the Deschutes River.


The Elite racers forget about the costumes and instead adorn themselves with lycra and all things aerodynamic.

Last year I competed in the PPP for the first time and surprisingly won my age group, finishing in a time of 2 hours, 21 minutes. For some convoluted reason I decided that this year I would enter in the Elite division.

I was feeling pretty relaxed about the whole thing until last Wednesday when I strolled up to the Bend Bulletin to have my picture taken with the other 6 elite women competitors, and did I get a wake up call……

I looked around me. To my left stood a former Olympian, to my right a NCAA collegiate athlete. In the mix there was a former-professional snowboarder, 3 members of XC Oregon and 3 former winners of the PPP. I was in way over my head.

Ben taught me to alpine ski last Sunday; forgoing the telemark skis for rear-entry alpine boots I could fit my skate ski boots inside of.

I borrowed Valhalla, a circa 1980 surf-ski from my good friend John a few weeks ago, bolted three 2x4s to the pedals so I could reach them and have been trying to learn to turn that sucker in the river.

I was planning to take the visor off my helmet and to put aero bars on my bike; complete with a compact crank (not ideal for going downhill at top speed).

Remind again me why had I singed up to race Elite?

When the Bend Bulletin article, Magnicifant 7, ran in Thursday Morning's newspaper, my stomach was in knots and all I could hope for was to not come in last, to be in the mix, to feel competitive.
My name was mentioned once; "Serena Bishop, 30, with a passion for mountain biking".
What the hell was I doing?

Ben read the article and sent me this email:

Subject: "That’s what I'm talking about"

"All seven of the entries in Saturday’s race could be considered a contender to win it."

I spoke with Aimee today who said that when she asked the boys (who know the entire group personally) who they have as favorite, without hesitation, they said Serena. You've got a real chance to do this and I wouldn't be surprised if you pull it off. You are freakishly strong, driven and know how to suffer.

Like your horoscope says, figure out how to enjoy it.

Well, I by no means won, but it is not often that I place 5th and feel great about it.

Alpine Leg: The Lemond Start, a 100m uphill run up to the skis, suited me well and I was

clicked in and heading down the hill at the front of the women's field. By the 5th or 6th gate, all 6 girls went zooming past me. I was just trying to avoid the snow plow technique and to flex into my boot cuffs – survival was all I could hope for. I came into the transition zone a little fast, crossing my skis as Ben attempted to get me out of those huge plastic boots and into my skate skis. My right binding of my skate ski didn't close properly and 10 feet from where Ben stood, I stepped out of it. He came to the rescue, got my boot into the binding and I was off again; but the other girls were already out of sight.

Nordic Leg: Alone. I was all alone. I wanted to be competitive.  It was the second leg of the race and I was already far behind. I couldn’t even see the other women. All I could do was skate and hope my strengths were their weaknesses. I passed a couple of guys, negotiated the downhill turns without incident and soon caught up to and passed one of the female competitors. That was a small motivational boost that quickly faded as I climbed Screamer and came into view of the next transition zone. The competition was no where to be seen.  They were already on their bikes.

Bike Leg: A hit of water, a change of shoes, and a smile from Ben. I was on my bike and charging out of the transition zone. I was behind, but not defeated. I put my head down and rode. There was a head wind, which probably worked to my advantage as I couldn’t push as big a gear as the other girls.  With a 50 front ring, there was a limit to how fast I could go. I spun out at about 41mph and at that point all I could do was get aero and hold on.
I was alone. Time trailing down the mountain and into town. A guy in an all white kit, fancy TT bike and rear disc wheel passed me. I was determined to not let him get away and with the flats in front of me, I was successful. Around the first round-about, then a right on to Colorado. There stood Meg.   My running shoes and cap in hand.

Run Leg: Running shoes on, cap exchanged for helmet and a Gu in hand. My legs felt heavy, I glaced at my watch, HR 167 – good. There was Ben.
"You're only a couple minutes back and they can't run."

I threw him my cycling gloves and smiled. After just a couple minutes I had my stride back. I felt strong. I caught and passed Taylor. Keep it up. Just before the turn around I saw Sara, Zoe and Muffy. They were ahead of me, but not by a lot. I kept a steady pace, dumped water over my head at every chance I got and checked my heart rate, 177…..With about a mile to go, I tried to pick up the pace. I am not sure if I was running any faster, but it felt like it.  I came close to the transition area and heard my name; my friends were there, cheering for me; what a boost, I can't thank them enough.

Paddle Leg: Rounding the corner into the Boat Launch area, I saw Ben, PFD in hand. I struggled to get in on, running next to him toward the boat. Eric handed me my paddle. Ben and Eric helped me get the boat in the water. I took a deep breath, sat down, and dug in. I couldn't tell how far back I was from the group of women at this point. Near the turn around I spotted Sarah, Muffy, Zoe, then Mary. I tried to use my core, paddling from the middle with loose hips. I made the first turn. One down, one to go. The down stream current wasn't as helpful as it should have been due to a nice little headwind; no break, keep paddling. I tried to stay in the middle of the river in strongest current line like Matt has instructed.  Whether or not I actually did, I am unsure. I wasn't too far behind Mary, but "too far" in kayak terms doesn't mean much to me. From the bridge I saw Eric, Meg, Anni, and Ben. From the banks I hear my name being called, “I am paddling as hard as I can, I promise,” I wanted to yell back.

Sprint Finish: You can't see the boat take-out until you are almost upon it and once you do, a couple last paddle strokes and you are off and running. Drop the paddle and the life jacket and go. They call the finish a spirit, but it is long. At least it seams long. There was no one close to me, no one for me to spirit against; at this point it was against the clock. I crossed the line in 2:08.

I found Ben, got a hug, and heard him whisper, "I know how we can win this thing next year."